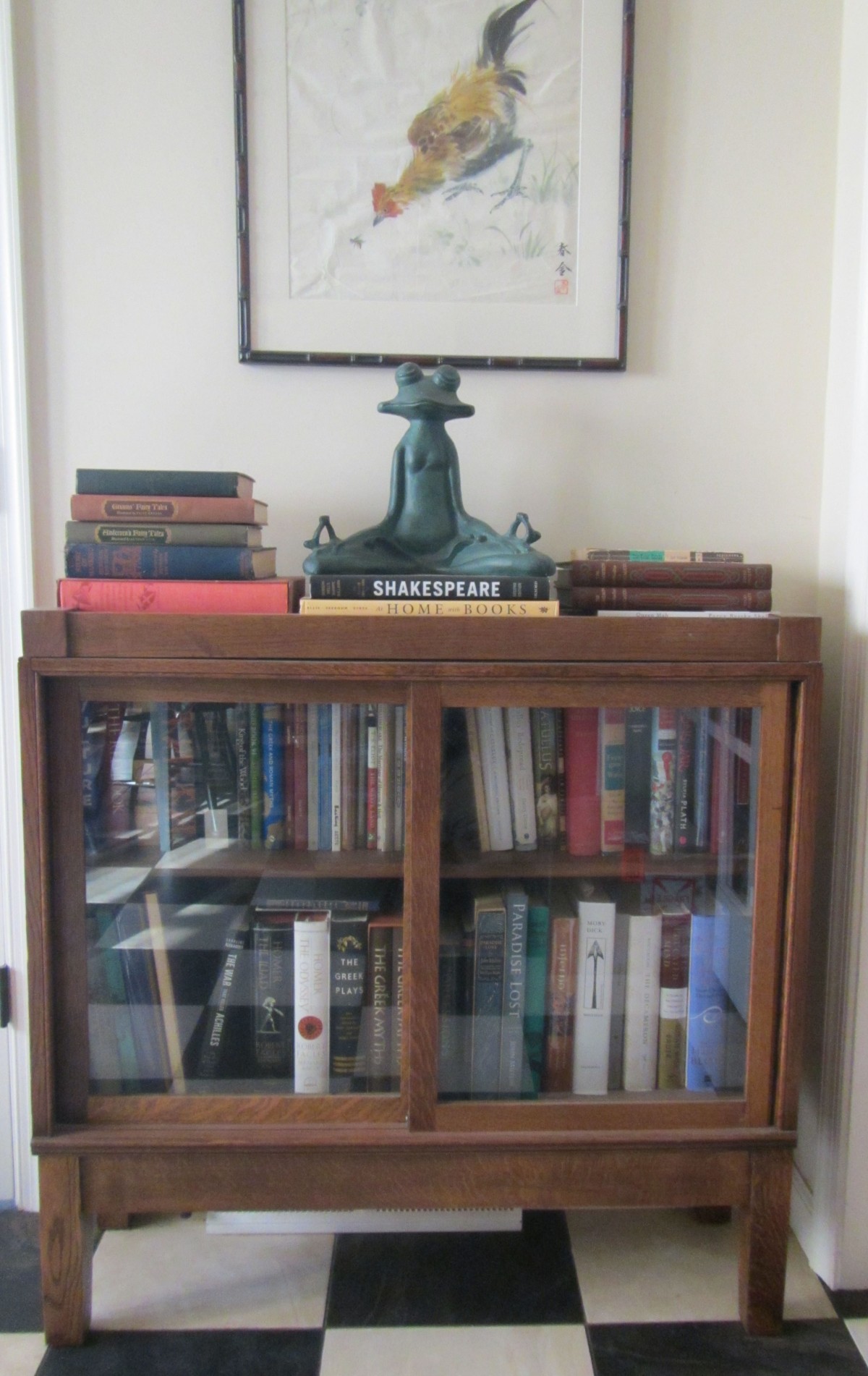 This page, through its first group of sublinks, will cover nothing fancier than short lists of books I have read during vacation windows, which includes all the traveling hours in airports, flying, standing in line at customs & immigration, actual “vacationing” reads, and then the pages consumed as I while away a torturing hour during the return trip.  Generally speaking, I read most of these books cover to cover, except for the final book of the trip, which I usually, but not always, finish up after we’re back home.  Some of the books I take with me with the intent of reading them.  Some I purchase on-island.  Some I pick up from the lending library that so many cottages have, and these I either leave where I found them, or I might make a trade, leaving one of my paperbacks in return for a permanent  borrowing into my collection *(subsequent words on books & keeping possums below).

Also, I realized other lists were emerging so there’s a second group of links that are topic-specific.  Most recently, I decided to add an entire bookcase devoted to sailing, by this I mean that this won’t be a short list of a half-dozen books, despite being that short now (July 2020).  I promise, this list will be growing as S & I delve further and further our focused research on our retirement project and it will require a dedicated bookcase by the time our departure rolls around.  We’ll split this list into two groups, maybe three….reading books, most of which will stay home; instructional books & guide books, most of which will be ziplocked and put into a traveling library; and a few books that will get the black spot before being set out on the ‘free’ table at the next annual neighborhood yard sale.

You’ll have to click on sub-pages for each trip or subject category if this sort of arcana appeals to you.  The great secrets are not what I’m reading when we travel, but what’s in what I’ve read.  If you’re after that level of detail, you’ll have to read the books for yourself as I won’t offer much in the way of Cliff-style notes.

Since I was determined to start blogging on the 2018 trip to Nevis, that’s where I’ll start with book lists.  It’s a shorter list, by page volume if not by title count, than normal, but that’s because I tried to spend part of each day hacking in my journal so that when I get around to writing up the long post on Nevis some of the words will have been written on-island, a necessity in terms of recall and memory jogging since I’m living through the pre-demented stages of my mid-life where absent-mindedness is frequently my natural state of mind.  Whenever the Drudge Report offers a link to an article on Alzheimer’s or dementia, I’m probably one of the first daily readers to click through, hoping that a cure will be found before I go batty.  Matt Drudge posts so often on the subject of degraded brain function that I suspect he lost a parent or grandparent to dementia.  Or he’s forgotten that he recently covered the subject with link on his aggregation page.

*What books am I willing to leave behind?  Good question.  None.  I’m a pack rat, as mentioned elsewhere, but it’s not just that flaw that causes me to hoard books.  Books become an extension of memory, and that’s important, at least for someone with a questionable memory and a penchant for writing.  When I write, I refer.  Frequently that entails going back into my library, finding a book, and thumbing through it.  It’s easier to find a passage in a book you’ve already read.  I don’t mean this in the blitheringly obvious sense expressed contrariwise, i.e., that it’s difficult to find a passage or sentence in a book you’ve never read.  Rather, I find it to be the case that having a physical memory of an individual book – my hardcover copy of Moby Dick, previously read, as opposed to the paperback copy I lugged on vacation, but haven’t yet read – makes it easier, at a subconscious level, to find a remembered passage.  Treasures we’ve passed over are there when we go back, thumbing through the pages, sifting with our eyes, whether we’re hunting with Ahab for a whale or with Jim for his island treasures.

However, pack-ratting isn’t fair if you’re also a borrower of books because a lending library of the sort you find at beach houses, island cottages, or even roadside in certain small towns, demands a moral payment in kind.  Either you return the borrowed book promptly, or you replace the book with one of comparable value.  This means you can’t, if you’re a decent person, visit the local public library’s annual book sale on the last day, scoop up a bag of ten-cent books and go about stripping D.H. Lawrence or Laurence Sterne novels from an island cottage and then leave a mass-market bodice-ripper crumpled on the floor, nor can you in good conscience substitute Beethoven (Based on the Smash Hit Film) for Godel, Escher, Bach.  Improve the lending library, or at least let it remain in the equilibrium in which you found it.

In part because we travel with kids, and we know, from reading the guest journals which many cottages keep, that a few other families tote kids to the islands, I have purchased multiple copies of Rascal by Sterling North.  This is my favorite book which can be appreciated by anyone aged seven or a hundred and seven.  It is a fair trade for most anything in a lending library that I’d like to walk off with.  This book may have ruined my parents’ experience of raising their firstborn as a ‘normal’ kid, and I can only wish the same for every other parent of every child born into this world.  I read and re-read Rascal, and then I diverged from the ball players, the TV watchers, the idle chewers of gum, and I spent my youth chasing, catching, and keeping critters.  To this day, it’s an unusual summer that passes without me being bitten by a snake because I see snakes on the ground in our woodlands as nothing other than an opportunity to pick up a snake and find out if it’s friendly.  Many are.  Though I never owned a raccoon like the masked rascal in Rascal, I did have a pet opossum for a summer.  Unlike a raccoon possessed of a lavish tail, the envy of any frontier hatter sane or mercury-mad, my boon companion had a bare naked, scrawny, scaly tail…but it was prehensile, and that has made all the difference.

Here’s a coonskin cap, painted by Angus when he was quite little and obsessed with Legos, and Davy Crockett.  That’s definitely a Lego head beneath the ringtail hat.

And because I found a few images, here are two shots of a tiny garter snake we found in the yard.  It was friendly, but squirmy, as I tried to hold it gently in one hand while shooting it with the other.  Snakes are always released back into the yard…we have lots, and they help to keep the population of voles, moles, & mice down to a reasonable level. 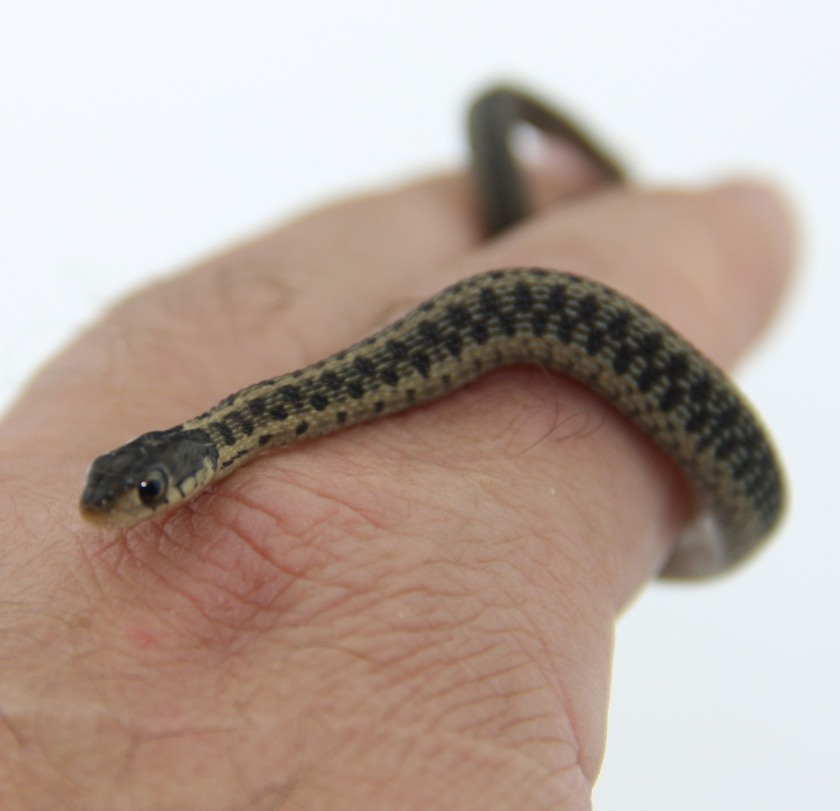 Somewhere I’ve got pictures of some  (all?) of the other kids holding snakes, many bigger than this one.  As I find them, I’ll post snake handling pictures on their pages.  S is the only one who heads the other direction when there’s a snake being passed around.  I might have a picture of her running.  Scratch that.  I do have lots of pictures of her running, but not running from snakes.

My mother also preferred to run from snakes, so she was less than pleased to discover she’d accidentally microwaved one for my dinner when I was a teen.