We call the featured image on this page, taken on Curacao, Quit Boozin’.  Quit, here, is short for Bananaquit, that friendly, yellow bird native to so many Caribbean islands, and is pronounced ‘keet,’ just like you’d pronounce the term for a juvenile Guinea Fowl.  Or at least many folks pronounce this bird’s name: Banana Keet.  We did meet a woman on Nevis who bemoaned the drop in the local population of “Banana Quits”…pronounced as though they had quit the island.*  And it was largely true because we saw only two Bananaquits and two Black-faced Grassquits during our time on Nevis.  This little one, pictured above, is perched on S’s garnish.  Notice the rumpled breast feathers, and a decided lean to the left…Whoa!  While he wasn’t drinking with us, it’s possible he’d imbibed enough with other guests that he forgot to preen before flying over for a visit at our table.  He stayed a short while, taking his fill of pineapple – a meal of opportunity for this nectar sipper.  Speaking of sipping, note the paper straw.  Straw consciousness has arrived in the islands as of summer 2018; on Nevis many menus noted that you’d have to request a straw if you insisted on using one.

As I type this sentence, I’m between islands again.  It’s a lazy Saturday afternoon in January and the day outside my window is dreary, and it’s got to be bitter because I’m chilly in a room with the wood stove cooking.  I should pour myself a Gingerita, neat, and let that put a fire in my belly, but all morning I’ve been day dreaming about Dark & Stormies.  I had my first at Anegada’s beach bar & restaurant, Big Bamboo in Loblolly Bay.  My father is a Barefoot Man groupie and when he saw the sign, he started tapping his foot.  Sing it if you know it!

At the time of that trip, in 2015, I hadn’t yet delved far into mixed drinks, but I was opinionated when it came to beer.  Most island bars serve a paltry assortment of island beers, plus the weakest mass market dross imported from the U.S., so that list includes: Red Stripe, Carib, Presidente, Polar, Michelob, Bud, Coors.   If you drink this stuff so cold you can’t taste it, at least it’s wet.  That’s positive.  Once the beer warms, even a little, and flavor starts to leak out, then you realize you’re drinking something not meant to be consumed, like urine.  Just like urine, it’s refreshing, if you’re dying of thirst in a hot desert.  If you appreciate good beer, go back to the U.S. where the craft revolution is in full swing.  So what do you order at an island bar?  An island drink.  A mixed drink.  I poured over the Big Bamboo drink list and settled on the Dark & Stormy.  Never mind, I didn’t settle.  I opted in favor of, and I loved it.  The Dark & Stormy is now a staple, at home and abroad. 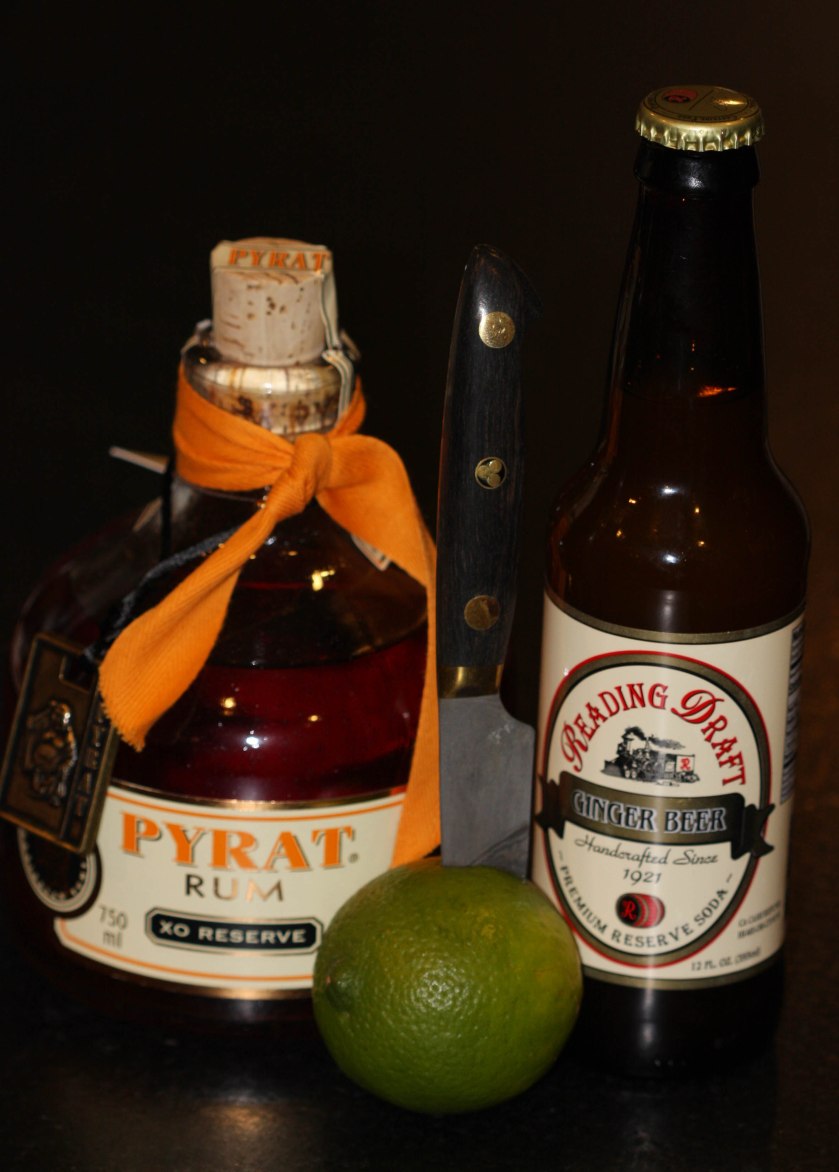 At home, our local Reading Draft Ginger Beer is a winner.  Half a bottle of ginger beer over ice, two ounces of a darker, spicier rum, and a quarter lime, squeezed.  This drinks – it’s well balanced.  In the islands, where you don’t want to have to stock a bar for a short stay, one bottle of rum, a sack of limes, and a six-pack of ginger beer becomes a worthy bar.  What I don’t like is a D&S that is unbalanced in either direction.  If I’m paying for a mixed drink, I want to know there’s rum in the glass.  On the flip side, if I wanted two shots of rum over ice with a splash of gingerale, I’d have asked for this.  Well, someone else might have asked for this.  I didn’t.  Gingerale is useless once you’ve developed a taste for ginger beer, and if you’re going to drink rum strictly for the sake of rum, then drink it neat, not with a splash of soda over ice to water it down.  A Dark & Stormy is great with a dinner of spicy goat.  The shot of rum, neat in a snifter, makes the perfect dessert while your wife nibbles at a fruit tart.  The D&S well built with decent ingredients lacks nothing worth fussing about.  It’s a good every day island drink.  But once you’ve had a much darker, stormier version, you’ll realize it lacks pizazz.  Be careful about spoiling yourself with better things, because it makes the good things tougher to bear.  I’ll put together a page elsewhere on how I make a Darker & Stormier that actually lives up to the comparison.  Hint: homemade ginger beer; navy strength rum; habaneros bitters; lime.

The glassware available in island cottages often isn’t the finest.  Who cares?  All that matters is the person you’re with and the fact that you’ve got a chance to share sunset and wine on a tropical island.

Keet or Quit, it’s still an awesome little bird, and we’re not about to call off more island adventures over a pronunciation dispute!