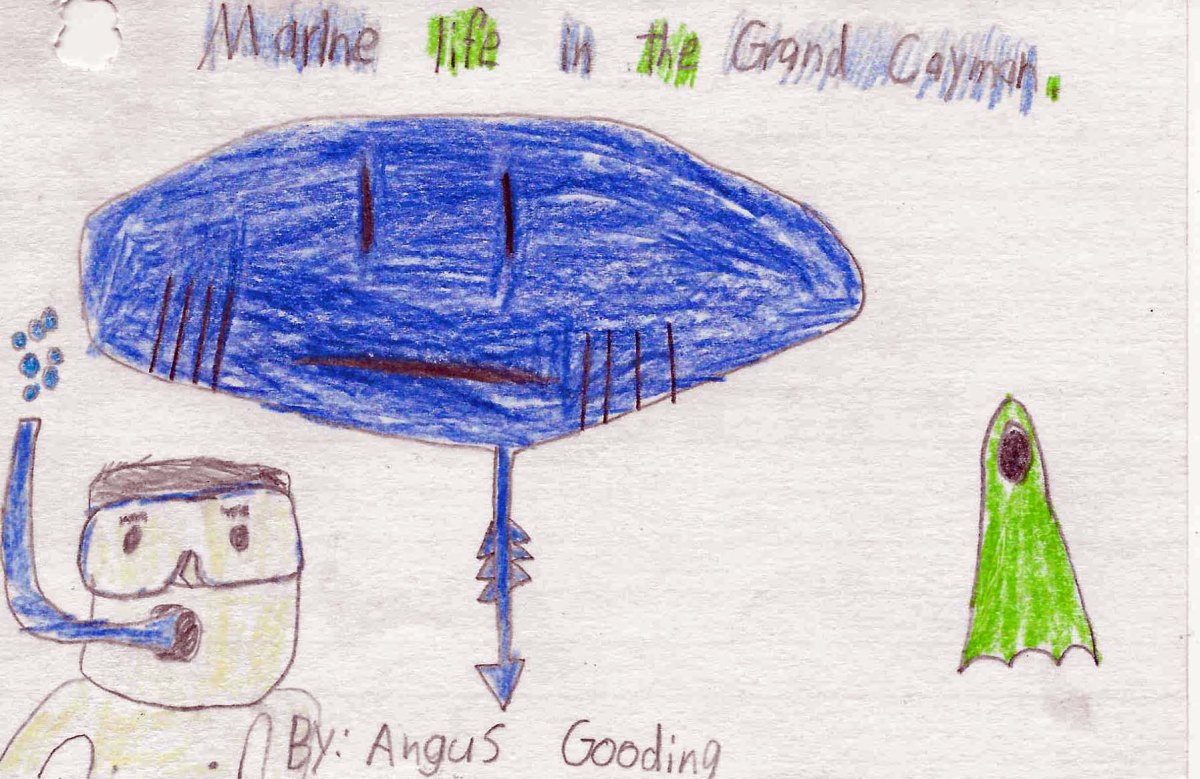 Angus and Drake each made up a set of marine life identification cards for our 2011 trip to Grand Cayman.  I found the set Angus made.  He would have been eleven when he drew these.  The cards aren’t fancy, but there were a lot of them…two dozen or more.  Each card had a quick, colored pencil sketch of the beast in question on the front, plus a small amount of text on the back with the creature’s name, habitat, ID tips, and behavioral quirks.  The ID cards were made up using books in our library, but I’m not sure which ones.  I doubt Angus was looking at a book when he drew the stingray pictured above, unless it was traced from Steve Zissou’s classic reference to undersea oddities, The Life Aquatic.

The point of this exercise?  We were killing birds, several, with one rocky project.  Rocky, because the project did not make dad popular.  My projects tended to be more involved than the cyber program’s projects.  Oh well.  The birds we killed?  Art class.  Science class.  And we got the kids ready for their snorkeling adventure, which was the most important bird to kill.  Before they even got into the water, they had a good sense, generally and specifically, for the sorts of animals we’d find on the reefs.  At this point, my kids were in cyber school.  Sometimes we did the school-assigned projects; sometimes we did my substitute projects, then I clicked them through on the website.  Note: this was alternate work, not skipped work.

Angus inserted his dark sense of the comic into his card set.  You’ll see a self portrait on the cover, which is the featured image.  This is normal enough, except his head looks a little like Buddy from The Incredibles – angular and oversized.  Elsewhere in his group of cards are two depicting sharks.  Both sharks are chasing a flipper-footed snorkeler off the frame of the image.  One can only imagine the gruesome end Angus feared for his flat doppelganger. Oh, yup, I confess, there went a Flat Stanley reference if that steamrolled right by you; I’ve read too many kids’ books over the years and they’re stuck in my head, Ed & Fred Flea right alongside Falstaff and Slothrop.

Without further ado, here are some of marine life drawings Angus created, angling for an internship as the expeditionary illustrator with Team Zissou.

The Brown, or Common, Crab: 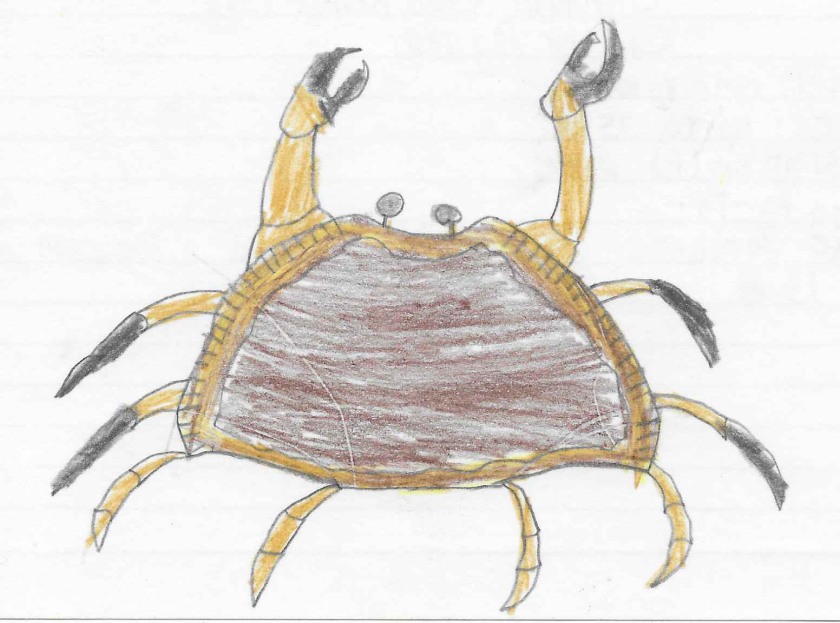 The Bullshark (with victim, and onlooker): 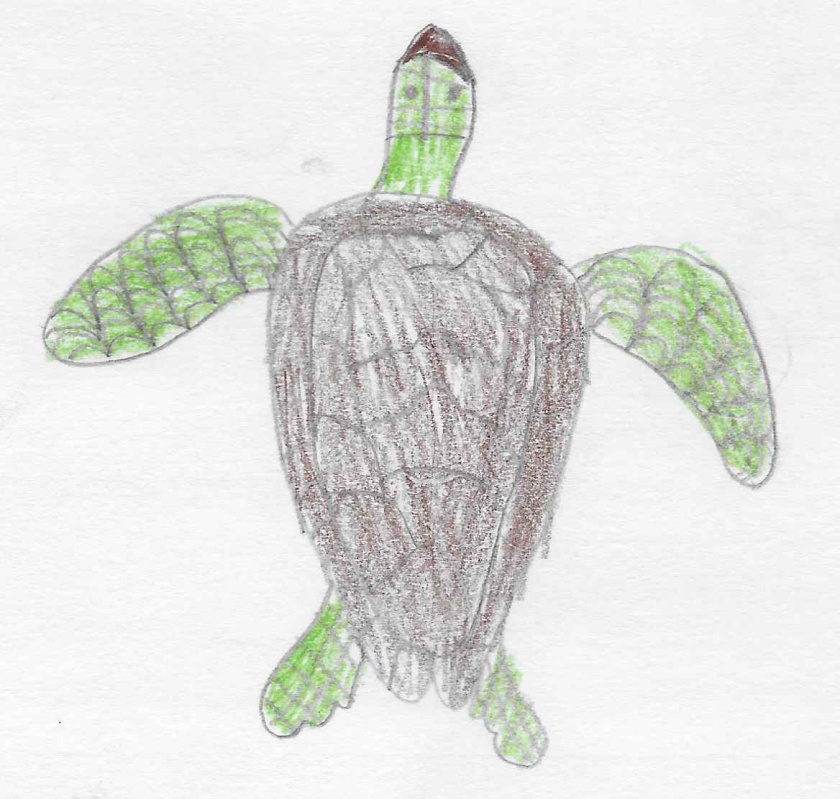 Here’s a Blue Tang, which may be going the wrong way.  Just keep swimming…

And a Soldier Fish: 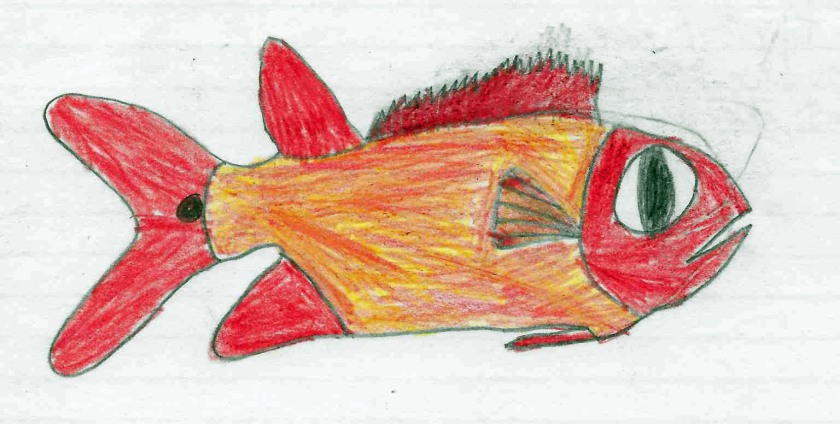 And, lastly, perhaps because he’s recording his own immanent demise, another shark: